Last month, we explored the topic of inflation which was one of the most common questions during our inaugural webinar. This month, we will examine our outlook for investment markets in 2023. While we do not know what the future has in store, there is one overarching narrative dominating the year to come. Taking a deeper dive, we will also review the key themes for various asset classes and geographies.

The following article is a summary of the Global Insight 2023 Outlook(PDF).

Recession fears are the key theme dominating the investment narrative in 2023. It is worth pointing out that the U.S. is not yet in recession, but there are several factors at play that suggest a broad-based economic decline will likely arrive this year. Let’s address a few of these factors in more detail. The most historically reliable leading recession indicator is the position of short-term interest rates compared with that of long-term rates. When the return, or yield, on shorter dated bonds rises above the return, or yield, on longer dated bonds (i.e. “inversion”), a recession has usually followed. Secondly, we appear to be entering a period of “tight money”. Higher interest rates on loans in combination with higher lending standards from financial institutions have curtailed the ability of consumers to borrow and spend. Finally, consumers have effectively spent much of the money provided by government support programmes. In other words, demand for goods was pulled forward during the pandemic when many services were not available due to shutdowns, and much of the pent-up demand for services such as travel has been fulfilled in 2022.

If recession is on the radar for 2023, what is the impact this may have on various asset classes and geographies?

Even if the economy succumbs to recession in 2023, if history is a guide, the equity market would likely begin a new bull market cycle before the recession ends. In fixed income, we think the window to put money to work is now open, but could close sooner than expected.

The U.S. stock market has already absorbed significant blows in 2022, including one of the Fed’s fastest and biggest tightening cycles in history. As the chart below shows, it would be rare for the S&P 500 to deliver back-to-back negative return years. In fact, this phenomenon has only occurred twice in the post-WWII era (1973–1974 and 2000-2003). 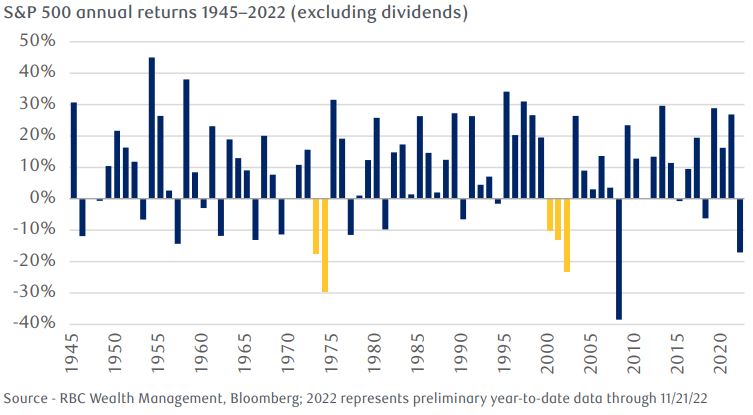 The most important objective for investors is to review portfolios and bring them in line with long-term strategic allocation recommendations. Allocations naturally get thrown off during corrections, but thankfully at RBC InvestEase we have a disciplined rebalancing strategy that regularly returns your asset allocation to your long-term strategic target. As we have consistently explained, timing the market is a precarious exercise. There is no bell that rings when a new bull market cycle begins. Missing the biggest rally days can have detrimental long-term performance consequences.

We believe the sharp rise in yields across the fixed income landscape that played out over the course of 2022 will give way to the opposite in 2023. For example, the benchmark 10-year Treasury yield could fall below 3.5% by the end of the year, from levels close to 4.0% currently, based on RBC Capital Markets’ forecast. The net result for fixed income investors is that the window to put money to work is open, and it could close sooner than expected.

The Canadian economy is also likely to slip into recession in 2023, but markets are starting to look past this threat. The equity market, including bank stocks, is already pricing in a modest economic contraction and housing market retrenchment. The recent surge in fixed income yields has returned the Canadian bond market to an environment where investors can achieve reasonable levels of income, including from historically lower-risk investments.

The S&P/TSX Composite Index trades at an approximate 25% valuation discount to its longer-term averages. This valuation discount reflects the unique composition of the index that is heavily weighted to financial, energy and material sectors. While energy and material sectors provided a performance advantage in 2022, elevated household debt levels and the outsized economic contribution from housing probably warrant the discount as it negatively impacts financial institutions.

Canadian fixed income was by no means spared from historically poor performance across asset classes in 2022, with elevated inflation forcing the Bank of Canada (BoC) to rapidly withdraw monetary stimulus and hike rates substantially faster than markets initially expected. Bonds that do not default must eventually reach par value on maturity, so poor trailing performance has led to improved return expectations going forward.

The sharp repricing of Canadian bonds is particularly apparent when looking at corporate bond yields. As the chart below shows, the yield on the average BBB-rated Canadian bond nearly doubled in 2022, and now pays investors more than at any point since the global financial crisis. 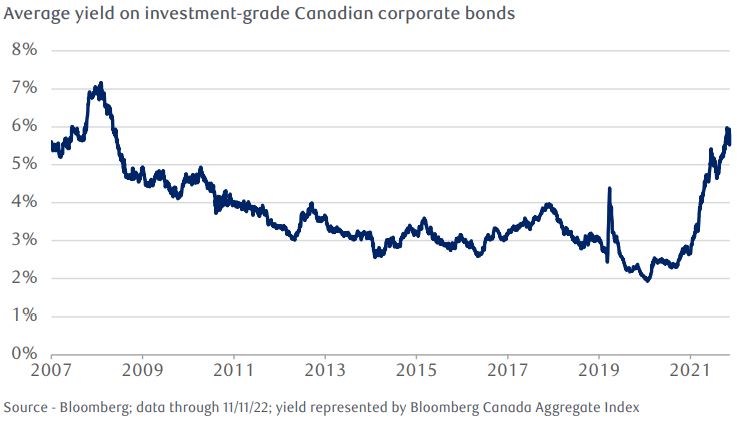 Europe faces many of the same risks as North America, but with the added element of geopolitical uncertainty. The energy crisis in the region is likely to cause a mild recession, however this added complication will also likely lead the European Central Bank to tone down its fight against inflation.

The additional geopolitical concerns in the region add an unwanted layer of complexity to our outlook. A key driver to economic growth will likely be the extent to which the region can escape the winter relatively unscathed. Despite all the economic and political headwinds, however, these concerns are clearly reflected in equity valuations which have become historically very cheap compared to U.S. Equities. Therefore, we remain cautious in our outlook, but do not want to abandon our allocation altogether.

Like other global central banks, European Central Bank officials maintain that borrowing costs must rise to counter inflation; however, their appetite to do so is waning. Forecasts show inflation in the region falling below target in 2024 which may be faster than other developed regions.

Easing COVID-19 restrictions has been a hotly debated policy in China, but even if health concerns abate, systemic issues remain below the surface. These systemic issues include public-private debt levels, and the degree to which the government regulation impacts international investment appetite for the country’s largest corporations.

Asian local currency bonds suffered outflows in the first three quarters of 2022, reflecting investors’ underweight exposure to Asian fixed income after aggressive unwinding of positions throughout the year. The 20th National Congress of the Communist Party of China took center stage in October, with China’s leadership appearing to take a new direction by playing down the importance of reform and economic development for future legislation. This adds to investors’ concerns that the government is increasingly prioritizing security and ideology over growth. We believe such a domestic policy may further weaken foreign investor sentiment that is already reeling from China’s regional geopolitical issues, tough zero-COVID controls, and a housing crisis.

If you are looking to learn how the InvestEase platform can help you navigate the current market environment, or if there are any questions we can address, our Portfolio Advisors would be happy to connect and discuss how we can help you achieve your financial goals.

send this article to someone

Also Check Out These Categories

Ready to Grow Your Money?

Get Started with creating your personalized investment plan now

Email Us questions at R B C investease dot com

Legal Disclaimer
Any information, opinions or views provided in this document, including hyperlinks to the RBC InvestEase Inc. website or the websites of its affiliates or third parties, are for your general information only, and are not intended to provide legal, investment, financial, accounting, tax or other professional advice. While information presented is believed to be factual and current, its accuracy is not guaranteed and it should not be regarded as a complete analysis of the subjects discussed. All expressions of opinion reflect the judgment of the author(s) as of the date of publication and are subject to change. No endorsement of any third parties or their advice, opinions, information, products or services is expressly given or implied by RBC InvestEase Inc. or its affiliates. You should consult with your advisor before taking any action based upon the information contained in this document.

The services provided by RBC InvestEase are only available in Canada.